Sadly in 2020 only the first 3 races in the championship fixture list took place and then Covid restrictions meant that the rest of the planned events were cancelled. We did try to continue with some fun self isolating events but these naturally fizzled out and so no championship trophies were awarded in 2020.
The tables (such as they are) are shown below : 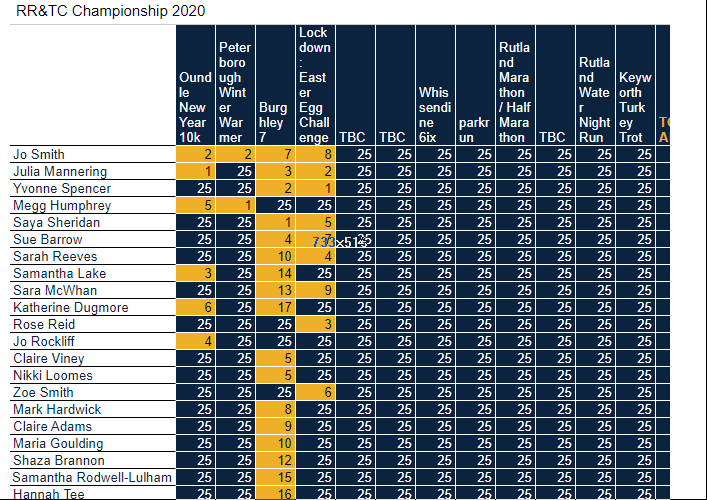 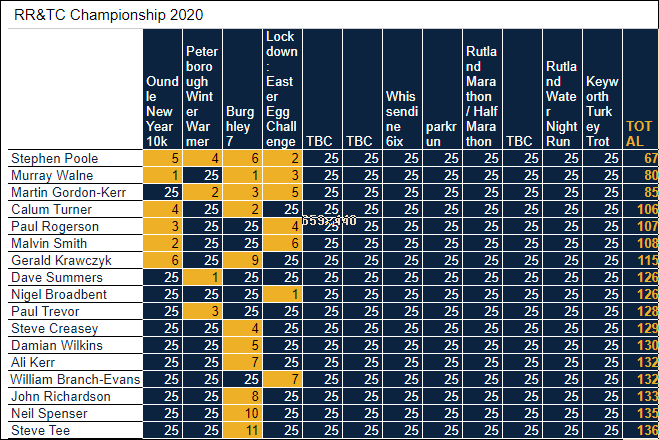 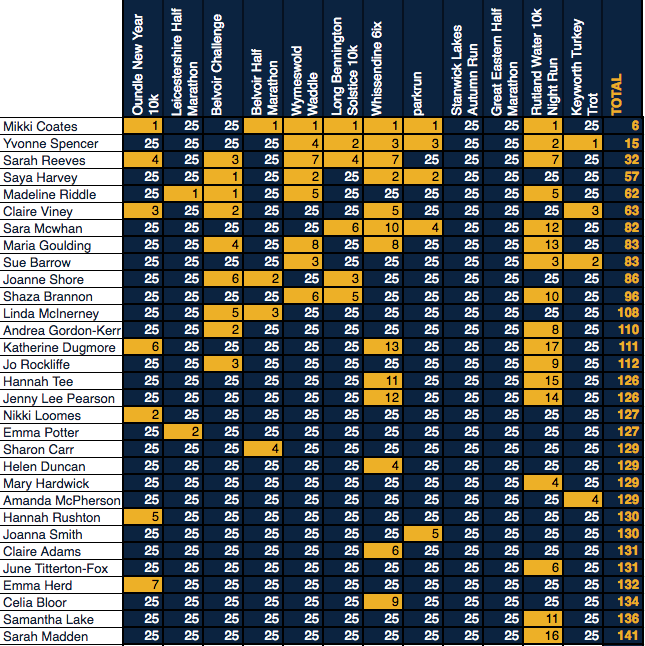 Congratulations to our 2019 Men’s Champion:Malvin Smith 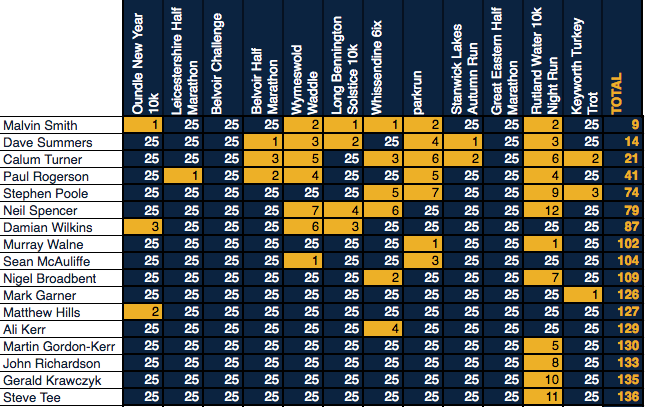 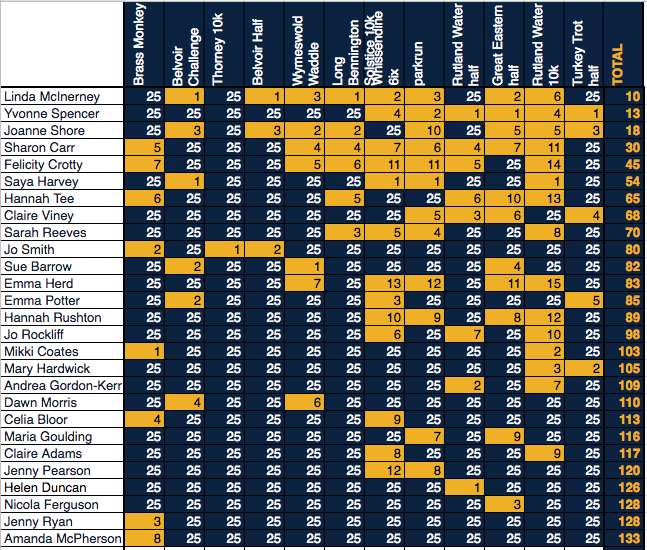 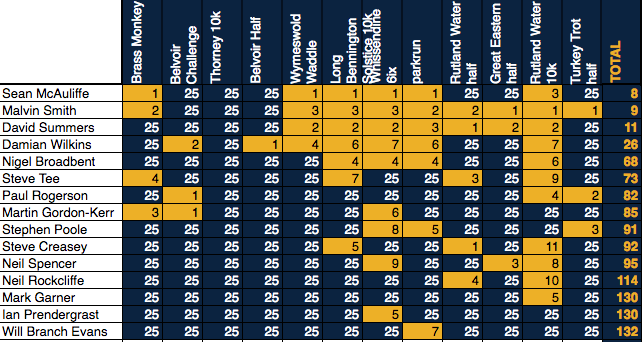 We reach the 150th milestone edition of The Racer 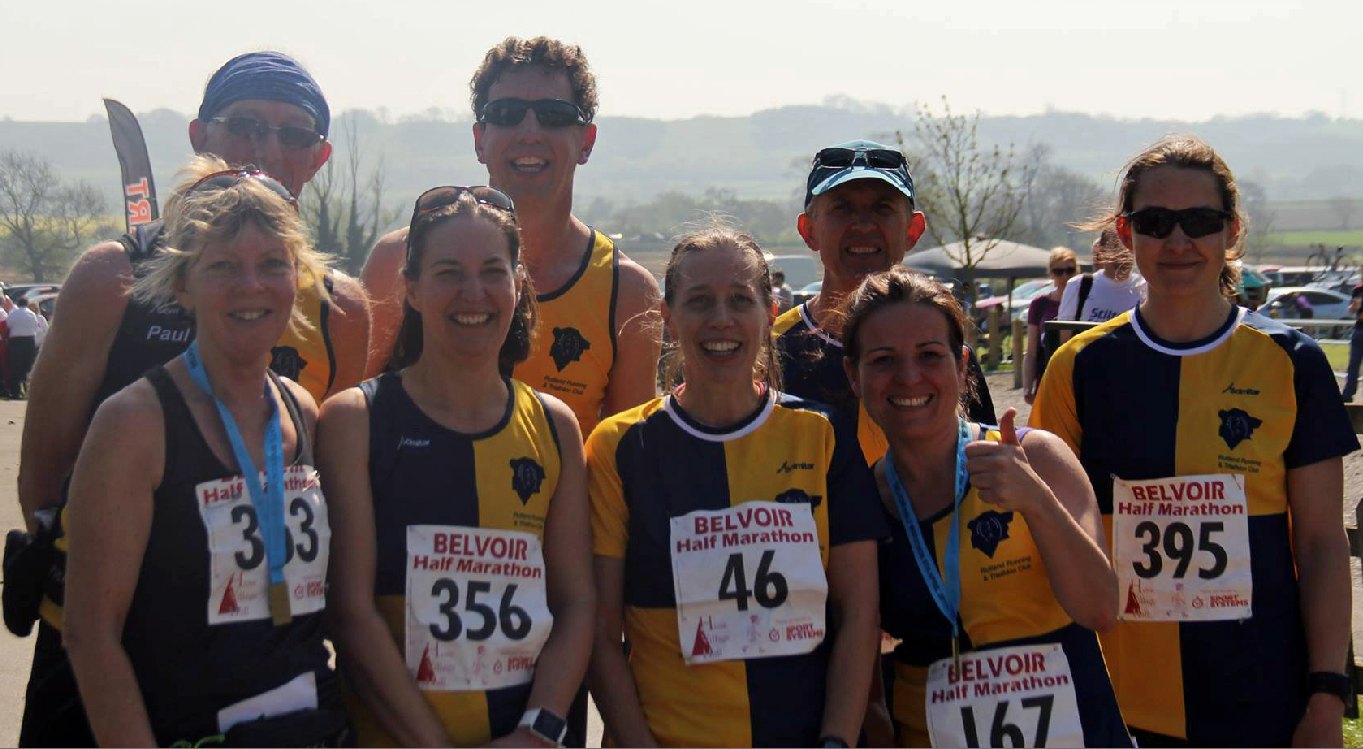 The sun was certainly beating down on Sunday 9th April at our 4th Club Championship race of the year, in the little village of Hose for the Belvoir Half Marathon. A Spring favourite within the club, the flat-ish course is good for PBs and welcoming for first timers. We had good turnout of 13 club mates take on the 13.1 miles through the villages of the vale of Belvoir. It was close in the men’s race with Chris Jones finishing in a great time of 1:41:39 with Martin Gordon-Kerr not far behind in 1:42:56 . It was even closer in the ladies competition, with Helen Duncan finishing in 1:49:51 just 30 seconds ahead of Emma Potter in 1:50:23. However there were some position changes once age-grading had been applied. 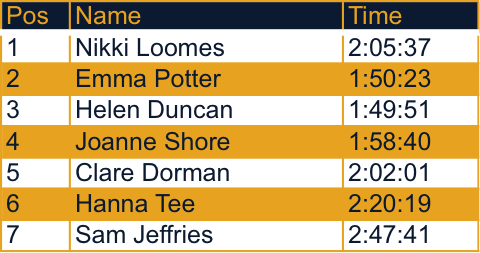 Congratulations then to Paul Rogerson and Nikki Loomes for great performances in order to take the honours in respect of the Championship points. Special mention should go to Gary Kirk, Hannah Tee and Sam Jeffries. All graduates of last year’s Beginners sessions and have now gone onto completing the Half Marathon distance. I know that this is Gary and Hannah’s first half marathon. Not quite so sure that this was Sam’s first time at this distance but it does make up for her disappointment after having to pull out of last year’s Rutland Half Marathon due to injury. Great achievement guys 🙂

So in the men’s Championship, Sean McAuliffe is still in the lead with Paul and Dave Summers in 2nd and 3rd respectively. Meantime things have the potential to be even more competitive with the Ladies. Currently Helen Duncan is leading on 31 points with Kate Howes just behind. However if Jo Smith, Emma Potter and Nikki Loomes complete some more races then things could get very exciting – keep it up.

The next Championship Race is the Wymeswold Waddle on Sunday 14.May. See club calendar for more details.

What a scorcher we all enjoyed last weekend. Those temperatures certainly serve as a reminder of the need to ensure that you have some water or better still an isotonic drink with you if planning on running (or biking) for more than 30 minutes. So enjoy the warm sunshine (when it returns) and make sure you have some sun protection too.

This week we have the results of the latest Championship race plus news from the Brighton Marathon and a 100 mile Sportive and more, so grab a cuppa and enjoy 🙂

Those of you targeting Spring marathons including London will now be moving into your taper phase. Enjoy this reduced mileage period when your body recovers from the hard work over the past few weeks but continues to adapt thus making you stronger and fresher so you can look forward to a great marathon experience 🙂

Sunday 26.March saw perfect spring weather conditions and the sun was shining for the latest round of this year’s Club Championship. There were 8 plucky club members that lined up for the start of The Thorney 10k. Sean McAullife (41:44) was once again first home for the club with David Summers (47:34) finishing in 2nd place just a few seconds ahead of first lady home Helen Duncan (47:47). Both Sean and Helen along with Jo Smith received trophies for being first in their respective age groups (brilliant).

From the Championship standpoint, that’s a clean sweep of wins for Sean as he continues to head up the Men’s table. Dave Summers is clear in 2nd place having run 2 races with Paul Rogerson in 3rd. Kate Howes continues to lead the Ladies championship table having run in each of the 3 races so far, with Helen Duncan and Jo Smith in 2nd and 3rd places respectively.

The next Championship race is one of the favourites of the club calendar – The Belvoir Half Marathon on Sunday 9th April. Details are on the calendar page … but I can confirm that postal and online registration is now closed but you will be able to register on race day starting at 8am (entries permitting).

The National Watersports Centre at Holme Pierrepont, Nottingham is reknowned for being in a rather exposed location weather-wise and even on a calm day there is always some breeze to be had. So last Sunday’s stiff breeze was always going to present a challenge to the competitors for the Clough/Taylor 10k that involved 2 laps of the Regatta lake and hitting a stiff head-wind at least twice.

We had 5 club mates taking part in the race that formed the 2nd race of this year’s Club Championship. First home for the men was Sean McAuliffe in 44:12 and looking at his Strava data you could tell when he was hitting the wind as his race-pace dropped. First home for the ladies was Kate Howes in 62:16 – well done everyone that took part 🙂

The full age graded results were:

So finally the clocks have gone forward and we can enjoy the longer days and more time for enjoying our running, swimming & cycling … have fun 😉

There have been a few of you on tour with your exploits so this week’s edition celebrates our “explorers”. So hop on the club mini-bus and let’s go for a trip 😉