Here is this week’s club news …

Friday (17.June) was the latest round of the Club Championship at the Beacon Hill Solstice Race. Set in the beautiful grounds of the country park at Woodhouse Eaves near Loughborough, this is a tough 5 miler involving two stiff climbs up the hill (the second highest point in Leicestershire) and a fast 1 mile downhill to the finish.

Unfortunately due to the popularity of this race there was a low turnout from the club due to the race filling up early on the year before more members had chance to enter. In any case first to finish was the club’s sole male participant Martin Gordon-Kerr in 37th place overall in a time of 38:01. Next to finish was Helen Duncan (43:41) followed by Kate Howes (48:35) and Jo Smith (standing in for Tracey Poole) in a very creditable 55:57. Well done everyone 🙂 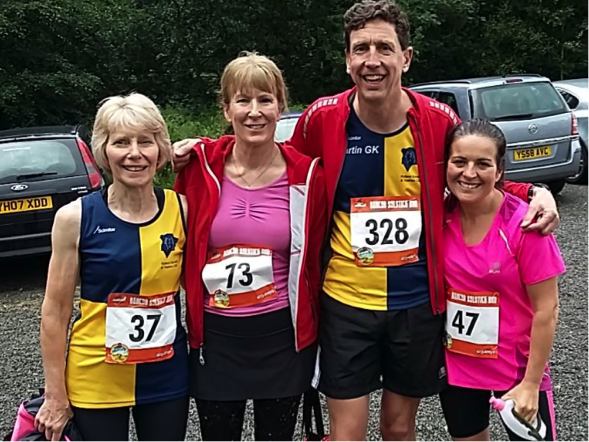 From the Club Championship standpoint after age-grading was applied, Jo Smith was awarded top marks and is now leading the Ladies championship table from Helen Duncan in second spot. Martin’s performance pushes him in to third place in the Men’s championship.
Championship Tables

The June weather might be a wash-out but what an incredible action-packed week the club had last week!!! Every day there was something happening and we have a load of things to celebrate and also to look forward to now that Summer is supposedly upon us. There’s something for everyone and hopefully this week’s news will give you the motivation to lace up your running shoes and get involved … otherwise you are missing all the fun 🙂

Here is this week’s club news …

We have another new member to welcome to the club this week in the form of Ellie Lovett. Another of Jenny Pearson’s friends, Ellie came to last Tuesday’s training sessions and enjoyed herself so decided to join straight away. Ellie has been running for a few years and has completed events such as Yorkshire 3 Peaks, Man vs Mountain in Snowdon and our very own Rutland Marathon. Welcome aboard Ellie and look forward to hearing on your exploits in the future 🙂

It’s June and you know what that means … yes it’s the start of The Rutland Round season. Yes another chance to tour the county whilst enjoying the beautiful views but at the same time negotiating the challenges along the way including nettles, mud (it makes an appearance somewhere during the series), the weather, livestock etc. This year sees us run in an anti-clockwise direction so if you haven’t experienced the delights of the Round book your Thursday evenings up now for the next 11 weeks (we miss a week for the Whissendine 6ix) and come and enjoy visiting parts of the County you don’t normally get to see.

Elsewhere in this week’s edition of The Racer we are looking for more of you to get involved with club sessions … PLEASE!!!